According to NIMH (National Institute of Mental Health)- Every 62 minutes, a person dies due to an eating disorder.

As per research studies- about 10% of women encounter compulsive-type eating problems. Also, 15% of men affected by an eating disorder. Generally, these conditions take place during adulthood of the individual.

What is an Eating Disorder?

Eating disorder is a physiological consequence of unhealthy eating habit. As a result, an individual may experience a disruption in the eating sensations such as hunger and satiety. Once this mechanism gets disturbed, automatically the disorder affects the individual with malnutrition, inadequate/ excessive food intake and overweight.

There are three types of eating disorders existing that include,

The individual with this eating disorder has an obsessed fear of gaining weight. They may voluntarily limit the quantity of food. As a result of their restrictions, they may experience heavy weight loss. According to a study conducted by Brown  University School of Medicine state that: Women (67%) are more prone to experience eating disorders than men (43%).

Anorexia may take a toll on their health

The individual loops themselves in a cycle of overeating or binge- eating without any control over food. Followed by purging (a behavior to compensate the overeating). During this episodes, the individual consumes a large quantity of food in a shorter period of time. And stay out of extra calories in an unhealthy way.

In most of the cases, the sufferer may not be identified by other. This is due to the feeling of shame, guilt, and poor self-perceived flaws. Bulimia has few impacting effects such as

The individual with this type of eating disorder often loses control over their eating habit. They eat more quantity in a short span and they would even eat when aren’t hungry. Sometimes the individual may purge purposefully to consume more food again. After the binge, they might feel disgusted or guilty for the amount of food they consumed. Some of the symptoms of binge eating disorder are

According to the researchers, genes and biological factors are the prime reasons for an eating disorder. A slight change in brain chemistry might play a vital role in an individual’s food habitual.

An individual’s emotional health can be a greater trigger for an eating disorder. If the person is through emotional roller-coasters such as depression, stress or other mental health-related issues it may contribute to this disorder. Some of the possible complications that may take place due to this disorder may include,

How to identify someone you know has an eating disorder? 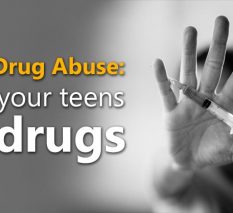 Teen Drug Abuse: How to Stop Teens from Taking Drugs