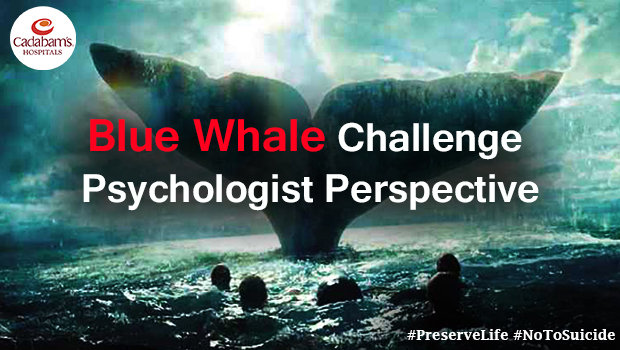 A new hot topic for discussion on all media platforms.

You must have read or heard about it by now, so a simple question to you

What does the title Blue whale challenge mean?

You must have heard about Whales found dead in hundreds on the shore of Australia and New Zealand, it was believed that as “ Whales mass suicide”.

So what has the game got to do with it? I would prefer to address the person who takes the game as a victim but not the player. Here the victim has to take up 50 challenges, first being to curve a whale on hand and then take a photo of it to send it to perpetrator for the approval, after crossing all 49 stages, the last is killing self, i.e suicide. The intention of the perpetrator is to push his victims for mass suicide like whales mass suicide.

Here I would I like to give a psychological reasoning for why the perpetrator is hunting for his victim and who would be his victim. The perpetrator - Philipp Budeikin, 21, from Russia, gave a police statement recently acknowledging he pushed the teenagers to death, he said-

“They were dying happy. I was giving them what they didn’t have in real life: warmth, understanding, connections.”

“There are people – and there is a biological waste. Those who do not represent any value for society. Who cause or will cause only harm to society. I was cleaning our society of such people.”


Why is he saying so? Why does he want to take up the responsibility of cleansing the society in such a brutalized way? Or Is he mentally sick? Or Is it grandiosity? Is it narcissism? These are the questions unanswered at present, but definitely, need to be looked upon at the earliest.
His first task is to attract as many children as possible, then figure out those who would be the most affected by psychological manipulation. Those who stayed were given much stronger tasks like cutting their veins, to balance on a rooftop, to kill an animal and post a video or pictures to prove it. A few group of kids who would get through these tasks were the ones who are physiologically and psychologically ready to follow whatever the administrators told them, no matter how strange or scary the tasks.
This kind of manipulation, controlling and sadistic behavior can somewhere answer our question, he might be sick. The victims - Teenagers, 100s of teenagers have lost their lives due to this deadly challenge. Why do certain population become prey? Who are they?  Why are they chosen?

Teens are the Target for this Challenge- Know This
Teenage/adolescent is an age where individuals long for an identity and existential questioning raises “who am I”?. Most of them look for approval and appreciation from the outside world to answer their questions, when they lack attention from their parents and friends, their self-esteem/confidence or self-worth is shaken up. This vulnerable stage is taken as advantage by the perpetrator to fulfill this wish. Teenagers who are struggling with self-are the ones who are more prone to become a prey.
According to the game developer, such individuals have no rights to live as they would be more happy to end life than struggle to get an answer and would be of no use to society. His assumptions are absolute nonsense.
As a parent, it is your duty and responsibility to safeguard your child. Here are few do’s and don't you can adopt to save your children from this social evil-

This is the time to act! Safeguard your child they are your and the country’s assets. Build them to be a strong pillar.

If you think your child is in depression or is facing any psychiatric troubles, it is advisable you get them diagnosed by a psychiatrist or a medical counselor. Visit www.cadabamshospitals.com to know about the causes & effects of depression on children. You can also reach us @+91 97414 76476 to book an appointment right away with our psychiatric experts and receive the right form of treatment for your child.