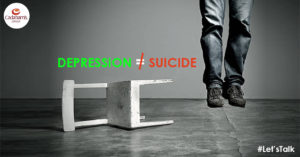 I am Vijay, 29 years of age, a successful counselor in a reputed psychiatric hospital in Bangalore, India. Past few years am repeatedly reading and hearing about students committing suicide due to depression. I was emotionally triggered somewhere deep inside, so I wanted to make a point and share my thoughts on student's suicide due to depression.

India is one of the highest suicide rate holding country, a nation that contributes 17.5% to the world population in suicide every year. Among the people who commit suicide are aged between 15 to 29, in that 80% of suicide victims were literate.

I got choked of thinking that how many Abdul Kalams and Vivekanandas were there in that 17.5%. It raised many questions to myself what makes these educated grown-ups take this sort of a choice. The shocking reason behind their decision is 'we the society'.

Yes, we are the genuine reason behind all the suicides. Wonder how?

As a parent what we want our son/daughter to become? "Get more marks than your neighbor", "They got selected in IIT or engineering, why not you", "You should score more marks than them". By constantly comparing them with others, we force them on paths which they may not want to tread on. We shatter their dreams and force them to be what we want them to be. In the end, all are disappointed. "At whatever point I felt miserable/confounded/worried, I knew there is a shoulder I can always lean on - my parents.” Be that support to your child rather than burden them with your dreams and expectations.

As a teacher what have we done to them. We only expect them to become the trademark of our institution. They have to score marks and enhance institution's progress and future. By imposing the grades on them, we ruined the dreams of every individual. We not only killed them but also our country's pride and nation's future development.

As a companion/well-wisher what we failed to do? We shared all their happiness together, yet we neglected to share their anxiety and dread about existence. Inspite of having a great chance of recovering them, you failed to do so and put down your hands selfishly and let them go deep into melancholy.

Stop living the life with your costly smartphones! Get in touch with the real life and communicate with each other because sharing will make your reduce your burden and allow you to rejoice life, and yourself! Take a pledge today, to be you!