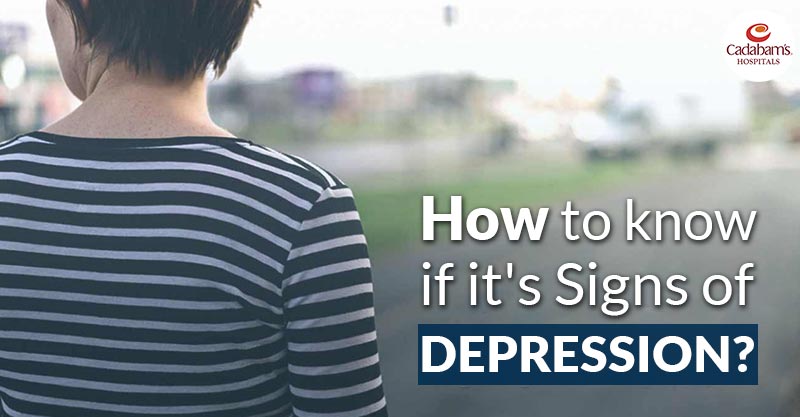 How to know if it’s Signs of Depression?

David had been feeling blue from the past few weeks. His productivity on the professional front had considerably fallen. There was a constant feeling of despair around him even when he was at home which started worrying Angelica – his better half. Angelica tried everything to make David laugh, but all he could muster was a feeble smile. Doing some online research, she figured out that David was showing early signs of depression and it was time to consult a doctor.

Does this story seem familiar? Take a look around yourself, and you’ll notice that many around you are suffering from pangs of anxiety or depression. According to a recent study, nearly 42.5 percent of employees in India’s corporate sector suffer from depression or anxiety disorder.

However, it’s important to understand that depression is a disease and not a character flaw. Also, the ones who suffer from it, understand the pain it causes, and the maddening and gut-wrenching impact it can have on your mind and body. However, seeking timely treatment can help you manage the condition and recover.

In this article, we will walk you through various aspects of depression that primarily include:

To find out more, keep scrolling!

As per experts, depression is a mental disorder wherein the individual starts feeling a sense of despair about everything in life. They are constantly gripped in the this feeling and are unable to enjoy life to the fullest.

Feeling sad on account of certain events in life is natural as a human emotion, however, if the individual starts feeling lonely and depressed for too long (weeks/months/years), it signifies the onset of depression.

Types and Stages of Depression

Depression is one of the leading factors for heart diseases and dementia and its onset may trigger due to multiple reasons. Before we jump to the segment detailing the early signs of depression, let us first learn about the different types and stages of depression:

The four most common types of the disorder include the following:

It’s the most common form of depression with other names like – Clinical depression, Unipolar depression, etc. If someone is feeling low or is showing a loss of interest in activities (which they liked before) for nearly two weeks, it’s a sign that they suffer from clinical depression. In the moments of depression, other areas like work, social relationships, too start getting affected.

In this type, the feelings of despair, low mood, etc. last for nearly two years but don't reach the peak of major depression. Individuals who suffer from Persistent Depressive Disorder function normally every day, but there’s always a lack of energy, enthusiasm present in them.

For individuals who suffer from this depression, it’s a roller-coaster ride. They show both a series of depressive episodes along with moments of high energy, high self-esteem, etc. and few moments of normalcy. The abrupt peak in feelings may often lead to self-destruct for such individuals and is followed by a period of depression.

As the name indicates, this type of depression follows a seasonal pattern. It mostly triggers during the winter season and gradually subsides with the ending of the season. If you’re wondering whether you suffer from SAD or not, look for signs like – lack of energy, considerable weight gain, unusual cravings for carbohydrates, etc.

Having found the answer to the most pressing question – how to know if you are depressed, it’s time to move onto the next segment, and learn how does depression feel like and what are the common signs of it.

Signs and Symptoms of Depression

If you are confused about  what depression feels like, here are some signs that can help you diagnose your condition:

Why do we feel Depressed? Causes of Depression

As per medical research, depression can pass on between generations. So, if anyone in your family ever faced depression, and you’re too feeling lonely and depressed, chances are that you’re suffering from depression too. However, that’s not always the case. Even if no one in your family had depression, it may still trigger due to various other factors. It’s worth remembering that genetics is just one of the risk factors.

Few neurotransmitters (brain chemicals) inside our brain are responsible for transmitting information between nerve cells while some neurotransmitters like serotonin and norepinephrine control our mood. So, if you’re feeling low, chances are that the count of these brain chemicals might be lower or they are not effective enough.

Mental stress, alcohol, and drug consumption, or hormonal imbalance can considerably impact your mood draining out your energy for no apparent reason making you feel lethargic.