ADHD Facts and Myths: What To Believe (And Not)

Attention Deficit Hyperactivity Disorder is one of the commonly found neurodevelopmental disorders in children. The mental disorder has a worldwide prevalence of around 5.3%, making it one of the prevalent disorders suffered by children. You cannot just grow out of this disorder; instead, it needs to be treated. If left unattended, there can be some serious implications in your adult life.

Children suffering from ADHD find it challenging to pay attention and control their impulsive behaviors. These can cause difficulties at home, school, or with friends. With effective and consistent treatment, a change can be developed in children’s behavior, allowing them to be more in control of their acts.

If you are looking for reliable treatment for attention deficit hyperactivity disorder, then Cadabam’s Hospitals is one of the reliable names to consider. With experienced psychiatrists, psychologists, therapists, counselors, and physicians on board, you can be certain of availing the best treatment for your child here.

After a thorough evaluation of the symptoms and overall health conditions, our group of medical professionals works together to create a personalized care plan for patients. To know more, book an appointment at Cadabam’s Hospitals. Call us at +91 97414 76476 or email at info@cadabamshospital.com.

Some ADHD myths or facts in Children 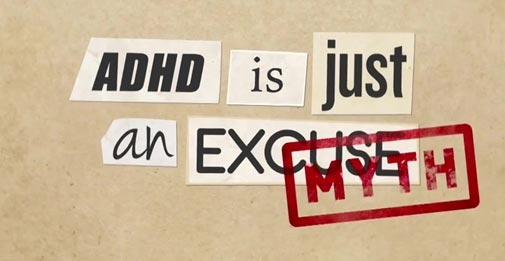 What Are The Symptoms Of ADHD?

It is not unusual for children to have issues in focusing and behaving sometimes. But when this issue continues, then it turns out to be a matter of concern. If not treated timely, the symptoms can become severe and cause issues. Some of the symptoms of ADHD include –

Busting The Myths Of ADHD

Do you know ADHD affects certain areas of the brain that involve problem-solving, planning, understanding others' actions, and controlling impulses? Children with ADHD act without thinking. They are hyperactive and have trouble focusing.

Mostly all the children act this way, especially when they're anxious or excited. But did you know there are few assumptions about ADHD in Children or ADHD Myths? Below are some of the ADHD myths, along with key facts.

Some ADHD myths and Facts in children:

ADHD is a legitimate diagnosis of a medical disorder. It is recognized even in its Diagnostic and Statistical Manual of Mental Disorders. Its primary symptoms are inattention, impulsiveness, and hyperactivity.

Boys have a more hyperactive-impulsive type of ADHD and girls have Inattentive ADHD. Although this is beginning to change, diagnoses for girls have risen 55 percent from 2003 to 2011, according to a study in the Journal of Clinical Psychiatry.

How Is ADHD In Kids Treated?

With over three decades of experience, Cadabam’s Hospitals assures of providing quality and effective treatment for ADHD. The multi-specialty team includes psychiatrists, psychotherapists, family therapists, counselors, and physicians. These groups of professionals together work to provide a comprehensive and personalized care plan for you. To know more, get in touch with the team at +91 97414 76476 or mail at info@cadabamshospital.com.

What can cause ADHD in children?

Can ADHD go away?

Do the symptoms of ADHD get worse with growing age?

Aging can result in cognitive changes in both men and women. If during this time ADHD symptoms are not controlled, then adults will deal with a lifetime of memory struggles and issues related to cognitive functioning.

What food should be avoided when suffering from ADHD?