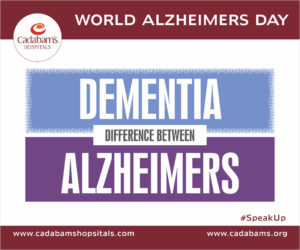 Dementia and Alzheimers can be hard diagnosed, not only because the exact cause is not known but because of the overlap of the symptoms between the two. Alzheimer’s and dementia affect millions of people every year. However, due to the lack of awareness, many of these cases remain undiagnosed and untreated. With the misinformation that surrounds aging, help is often sought at the last stage. Early diagnosis and treatment can significantly slow down the progression and increase life expectancy.

We offer world-class, evidence-based treatment that is fit for all stages and all types of dementia and Alzheimers. At Cadabams, we care for you. We are the only psychiatric institution in India to be recognised and supported by CNTW and NHS. For more details, reach out to us on our 24/7 dementia helpline @ +91 7353226622, or mail us at info@cadabamshospitals.com.

Studies have shown that about 10% of the world’s population between the ages of 65 to 74, and one-fourth of the population above 85 suffer from some form of mental illness. These alarming numbers are only on the rise and the only way to keep them in check is to spread more awareness about the threat they possess.

Dementia is an overall term used to describe symptoms that impact the performance of daily activities, communication abilities, and memory. Whereas, Alzheimer’s disease is the most common type of dementia, which gets worse with time and affects memory, language, and thought.

Although the symptoms of the two diseases may seem similar and overlap, you must understand Dementia and Alzheimer's differences. This will be important for the management and treatment of these diseases.

How is Alzheimer's Disease Different from Dementia: A Detailed Overview

In layman’s terms, dementia is a group of symptoms that affect the mental abilities of an individual, and Alzheimer’s disease is a type of dementia that affects language, memory, and thought.

Dementia constitutes a group of symptoms showing an overall cognitive decline characterized by issues and impairment of memory, language, judgment, behaviour, problem-solving, and other thinking abilities. It is of a chronic or progressive nature.

Dementia is not a single disease. It is a comprehensive term that covers a wide range of specific medical conditions like Alzheimer’s disease, Lewy body dementia, etc. The prime characteristic of dementia diseases is 'brain degeneration' and the disorders under this umbrella term 'dementia' are caused by abnormal brain changes.

Brain damage is a consequence of the loss of neurons or neuronal connections. The most common cause of dementia is the destruction of cells in the brain. Even though age is considered to be a strong factor of contribution to dementia, dementia problems are not restricted to senile dementia and can also be offset in younger age groups.

Earlier there was a common notion that dementia is nothing but ‘senility’ - the cognitive changes with advanced age. But it is often difficult for families to understand the differences when it comes to aging vs. dementia vs. senility. It is a common myth that elderly people are likely to develop dementia.

Though dementia is most common in the older demographic, it is not just the senile who have the likelihood of developing dementia. People in their 40s can also show symptoms of the diseases in the early stages leading to the early onset of dementia, but this only occurs when they have family members with dementia.

The symptoms of dementia become pronounced as the stages progress. Sometimes, dementia symptoms may also be caused due to two or more other diseases. Such a condition is known as Mixed Dementia. At early stages, dementia causes the emergence of symptoms such as:

At later stages, dementia may exhibit symptoms such as:

Whereas senility symptoms also include physical changes such as:

At the later stage of dementia, it becomes imperative for caregivers and family members to be present all the time to take care of the patient. At an advanced stage of dementia, complete dependency on the caregiver is expected. You can also check Dementia Rehab or assisted living facilities like Cadabams Hospitals.

There are two types of primary dementia treatments that are used to help manage symptoms of dementia.

Cholinesterase inhibitors - One of the drugs used in senile dementia treatment that works by slowing down the breakdown of a chemical called acetylcholine. This chemical is designed to help the patient form memories and improve their judgment capabilities. It may also delay the worsening symptoms of Alzheimer’s disease (AD) and subsequently dementia.

There can be some side effects of taking this drug as well. Patients and their caregivers should research about the side effects before going ahead with their medications. These medications can only be prescribed by a licensed medical professional.

Non-Drug Therapy: In the case of frontotemporal dementia treatment, occupational therapy is the best way to manage the symptoms. This type of therapy takes the help of trained dementia caregivers to help the patient get back on their feet by assisting them with understanding how to do their daily tasks like bathing, dressing, or eating properly.

Different types of dementia depend on what type of brain cell is damaged in what particular regions of the brain.

Alzheimer’s disease – It is the most common cause of dementia and is caused by the aggregation of proteins called plaques and tangles causing the brain cells to waste away.

Lewy body dementia – It is caused by the formation of balloon-like clumps in the brain of people suffering from Alzheimer’s disease and Parkinson’s disease. Lewy body dementia treatment comprises blood tests, brain scans along with several prescriptions of medications, and therapy recommendations.

Alzheimer’s is a progressive brain disease that is caused due to complex brain changes following cells to waste away, damage, and die. It slowly affects the brain causing impairment in cognitive abilities and memory. Alzheimer’s disease is progressive in nature and worsens over time.

The cause of this is unknown. In Alzheimer’s disease, there is a formation of abnormal structures in the brain, which blocks communication between the brain cells leading to the death of brain cells. It is not possible to diagnose someone with this disease with complete accuracy, but the patient is diagnosed as ‘probable Alzheimer’s disease’.

The symptoms of dementia and Alzheimer’s may overlap, but there are some differences. Similar symptoms include reduced ability to think, impairment in communication, and memory.

Symptoms of Alzheimer’s mostly include -

There is a significant difference between Alzheimer’s and dementia. Dementia is an overall term that is used to describe symptoms that have an impact on the memory, communication ability, and overall performance of the person.

Alzheimer's disease is a type of dementia and it is the most common form of the condition. Alzheimer's gets worse over time and it begins to affect the language, memory, and thought process of the individual, hence early diagnosis is essential to effective treatment.

While younger people are at risk of developing dementia or Alzheimer's disease, the risk will increase as you age. However, you must note that neither dementia nor Alzheimer's is a normal part of aging.

Alzheimer’s disease is one of the highest leading causes of death among senior citizens. Approximately one in three people, aged 65 and above, will die from Alzheimer's disease or any other type of dementia. It will kill more people than breast and prostate cancer.

Since Alzheimer’s is a progressive disease, the earlier the diagnosis is made and the earlier treatment begins, the better is the outlook for the patient.

Outlook for People with Dementia

The outlook for patients suffering from dementia depends completely on the direct cause of dementia. The available treatments are used to make the symptoms of dementia manageable, but there is no sure-fire way of stopping the deterioration of the mind due to this disease.

Although vascular dementia can be slowed down in some cases, it can still shorten a patient’s lifespan. Some dementia variants are reversible, but most of them are irreversible and can cause physical and mental impairments, over time.

Alzheimer's is a terminal illness, and no cure is available. The period between each of the three stages varies. Dementia, on the other hand, can be reversed or controlled if detected in the early stages.

It’s best to talk to your doctor if you are concerned about the symptoms of dementia or Alzheimer's disease. It’s best to start treatment as soon as possible because it will help manage your symptoms more effectively.

To learn more about the disease and better caregiving avenues, contact Cadabam’s Hospital. Our mental health counsellors will help you learn coping techniques for dementia and Alzheimer’s Disease.

At Cadabams, we have over two decades of experience in handling the rehabilitation and unique needs of people with dementia and Alzheimer’s. Our services are distinguished by the expertise of our multispecialty and experienced healthcare professionals who work with the individual and their family to come up with customised plans that cater to every need.

We don’t just offer care plans for seniors, but we also work with families to deliver world-class personalised caregiver support plans to ensure that we bring energy, independence, and joy to their lives. Our care team also takes care that you have clear lines of communication with healthcare professionals. To gain more information about how to help a loved one with dementia and Alzheimer’s, or for any help you require, feel free to call us @ +91 96111 94949 or mail us at info@cadabamshospitals.com.

FAQs About Dementia and Alzheimer’s Disease

As outlined throughout this post, dementia and Alzheimer’s disease are two different things. Dementia is a group of symptoms that affect the mental abilities of an individual. It’s a general term used to describe the decline in one’s mental ability to a point that it interferes in their daily life. Alzheimer’s disease, on the other hand, is a progressive disease. It’s a type of dementia that causes impairment in memory, language, and thoughts.

People who have Alzheimer’s disease running in their family are more likely to have it; they are at a higher risk. The same goes for dementia. However, only in rare cases, there’s a strong link between dementia and genes. There are many other factors that determine whether a person can have dementia or Alzheimer's disease.

Dementia and Alzheimer’s disease do affect mental health. However, they aren’t particularly a mental illness but rather a brain disorder or a progressive neurodegenerative condition.